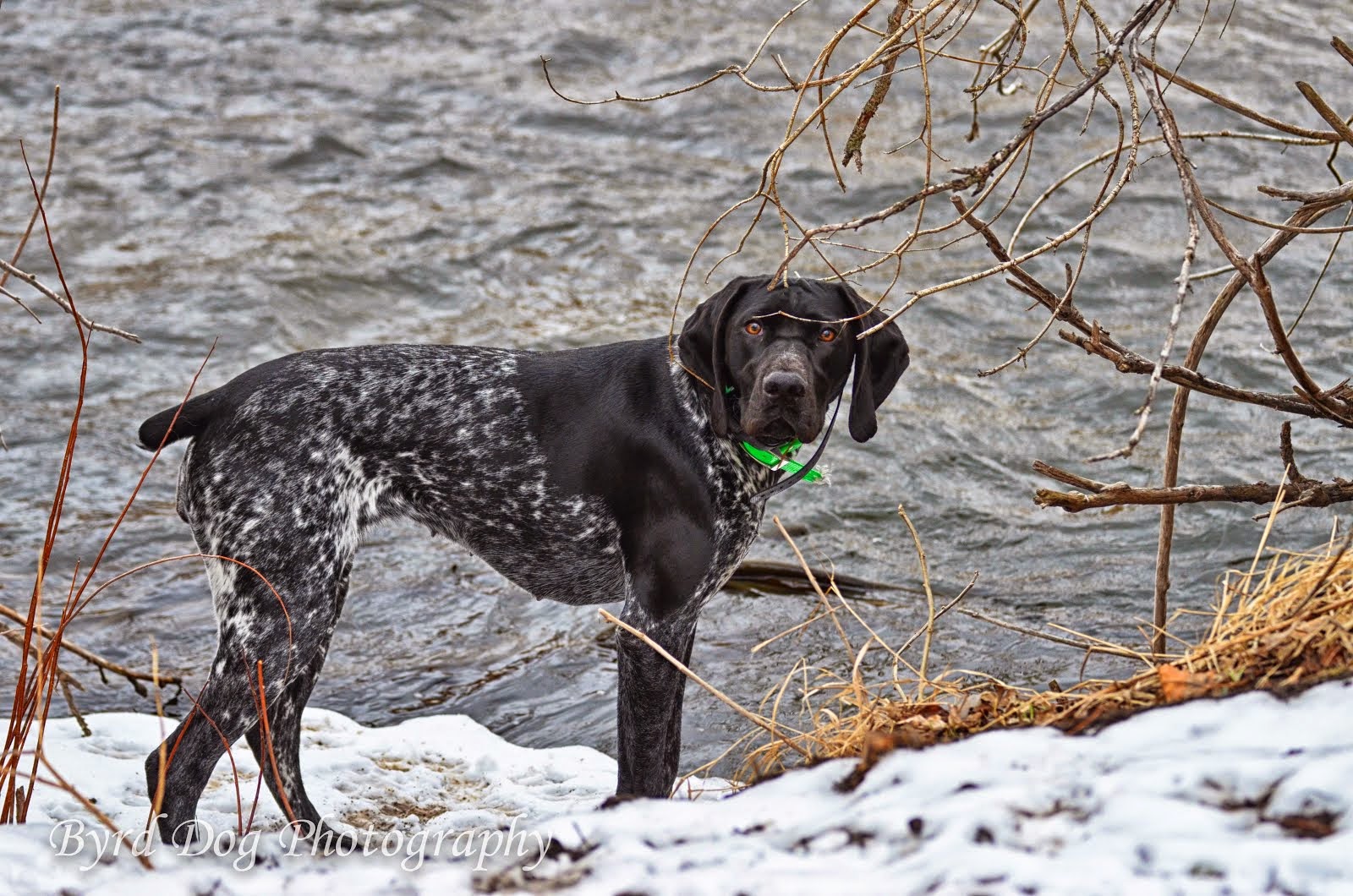 Wolves in the Woods 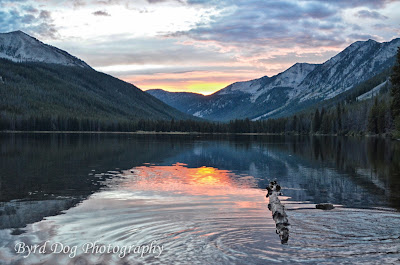 This past Labor Day weekend Wyatt and I were lucky enough to be invited by some friends to stay in a rustic and family owned cabin in the Beaverhead-Deerlodge National Forest. The Cabin is located beyond the tiny and whimsical town of Wisdom, MT. I had been to Wisdom (population 98) in the Fire Hole Valley once two years ago to test Sage in her NAVHDA Natural Ability test. You can read about that adventure here: A Tale of two Sages and a Dog named Sprig. 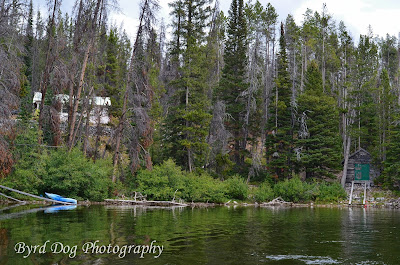 The cabin is a hidden gem. Nestled solo above the shore of a 75 acre alpine lake. A connecting smaller lake lay not far away and the beautiful adjacent ridgeline crests over into Idaho. The only other people within miles were a few scattered campers down the road camped along the lake in designated campsites. Upon our arrival we stormed into the 1928 built cabin and happily chaperoned it from its often dormant state into full use. Andrew who's family has owned the cabin since the 1950's hiked up a ridge 150 yards or so into the deep woods to turn the water for the cabin on. On the way down he turned a necessary second water connection on and soon after we had the propane fridge fired up, beers had been cracked and some wood was chopped for later use. 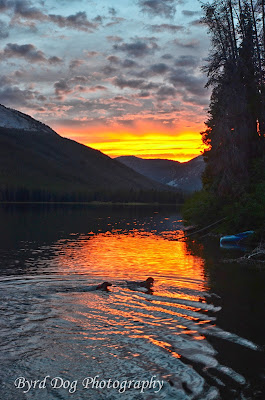 Sage, Figs and our friends German Shepard Reika were plunging into the lake chasing each other immersed in a fanatical game of keep away. All was right with the world. We spent the next two days kayaking and fly fishing the lake from an old row boat. Filling the cabin with smells of bacon and thick coffee in the morning. Mimosa's and then later beers and bourbon would flow. We hiked the woods with the dogs and enjoyed campfires and laughter outside. 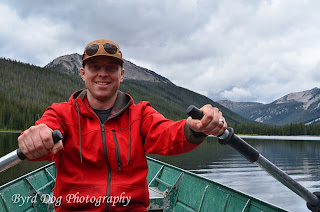 Reika getting her hike on 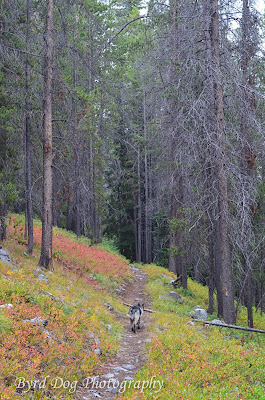 The last night in the cabin the evening drew in and with it came a snow storm that would dump snow all night into the day we left. The few campers who sporatically littered the lower lake packed up and left. The cold weather also brought with it a wolf pack most likely from Idaho. 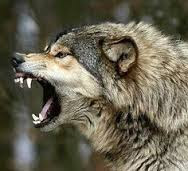 When the weather turned everything changed. We listened with hairs standing on end as the first howls crept up over the far ridge but soon enough they settled into the woods behind the cabin. The air felt different, the dogs demeanor changed, we all felt eyes on us. We moved our party inside, fired up the wood stove and enjoyed the solace from within the safety of the cabin. The dogs were instantly kept on leashes when taken outside to do their business. Reika who slept by the locked door each night seemed to patrol the windows occasionally growling and barking into the night and early morning. It was cozy but easily could have been the making of a Stephen King novel.


Sage Monkey sidled up to a warm stove 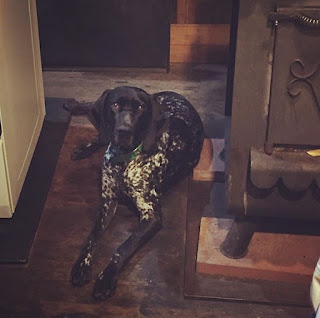 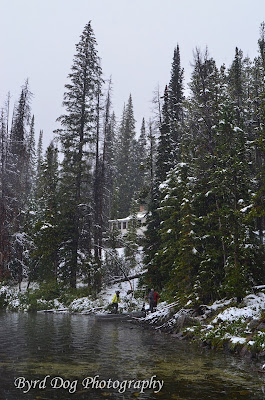 In the morning we started to undo the initial spell that brought the cabin to life. It was time for us to rig up and head out and return it to it's state of slumber. We all felt nervous outside and stayed together in pairs or as a group when heading down to the bathroom, returning the boat to the boathouse or dragging up the kayak.  Figs protested any involvement with being outside and promptly held her business refusing to go to the bathroom entirely. When it came time for Andrew to venture off into the woods to turn the water off I offered to accompany him. 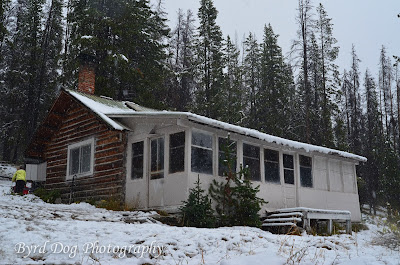 As we headed out I grabbed a can of bear spray off the table in the screen porch. Andrew picked up the ax we used to chop wood the day before. Sure wish I had brought a gun....but off we went into the woods. I couldn't help the feeling that we were walking into a gun battle with knives. We got back about 25 yards to the first water pipe destination. We tentatively looked around. It was snowing, the cabin was out of sight, and we were off trail. Andrew put the ax down and used both hands to turn the water off. That's when a zombie wolf jumped out from behind a tree and killed us both. Angry and restless Ghost of Robyn is writing this blog post now. As soon as its posted I'll be off to haunt the woods and fuck with new campers. Just kidding! 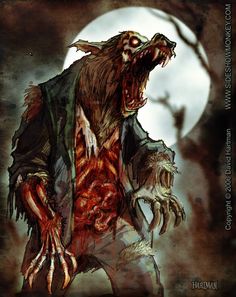 Andrew picked up the ax and I said to him, Do you want to try and make it up on the ridge to the turn the rest of the water off? We both stared at each other as the snow fell silently to the ground around us. We were a quarter of the way there.  He said sure and we turned and set off away from the cabin again.

We walked in silence at first although we both know silence is bad. The situation was so tense basic chit chat was hard to create. We made forced quiet small talk and pushed on. About 20 more feet I reached out and grabbed Andrew's arm. I pointed to a massive wolf track in the snow next to our shoe prints. My brain instantly struggled to make sense of the print. My gut reaction was a split second of denial. Could it have been one of the dogs that obviously hasn't left our sides and have been kept on leashes the last 24 hours? Could they have snuck out here to have made that? OF COURSE NOT STUPID. And for fucks sake its HUGE and its fresh in the snow!! RUN FOR YOUR GOD DAMNED LIFE! Andrew pointed around just feet from us, the prints were everywhere. Then to the left a wolf kipped about 40 feet away. Then another maybe 40 feet to the right. I think its time to go...... We turned and started to hustle.....not running but not out for a leisurely evening stroll either. I clearly remember thinking don't panic you asshole that's how you get killed! Look for the trail!

Andrew and I emerged from the woods completely rattled. Neither one of us stopped until we made it into the cabin. I think my hands shook for a solid 5 minutes. Needless to say the last water connection did not get turned off. We finished packing up, loaded the dogs safely and then made our way back to civilization and pizza and beers in Wisdom. The trip down from our camping spot was like the trip itself a total adventure complete with chopping down trees.


Please note badass Christina jumping out with ax in hand 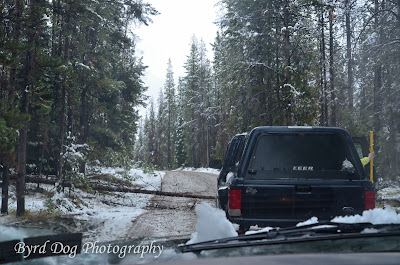 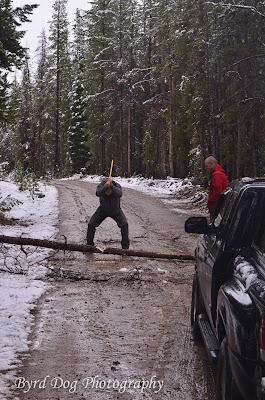 Our long weekend was super fun and no one got eaten by wolves which is obviously a super bonus. The dogs had the best time sleeping next to the wood burning cabin stove, chasing chipmunks in the rock wall and running like wild women through the woods. We got to cast some lines and hang with dear friends. The weekend was a total win.

byrdgirl
Fighting the good fight since 1981. Check out the About Us tab for more info!

View my complete profile
Unauthorized use and/or duplication of this material, including photographs, without express and written permission from this blog’s author and/or owner is strictly prohibited. Excerpts and links may be used, provided that full and clear credit is given to Adventures of a GSP Hunting Dog with appropriate and specific direction to the original content including a link back to the original content on this site.

Promote Your Page Too

Adventures of a German Shorthaired Pointer

Promote Your Page Too